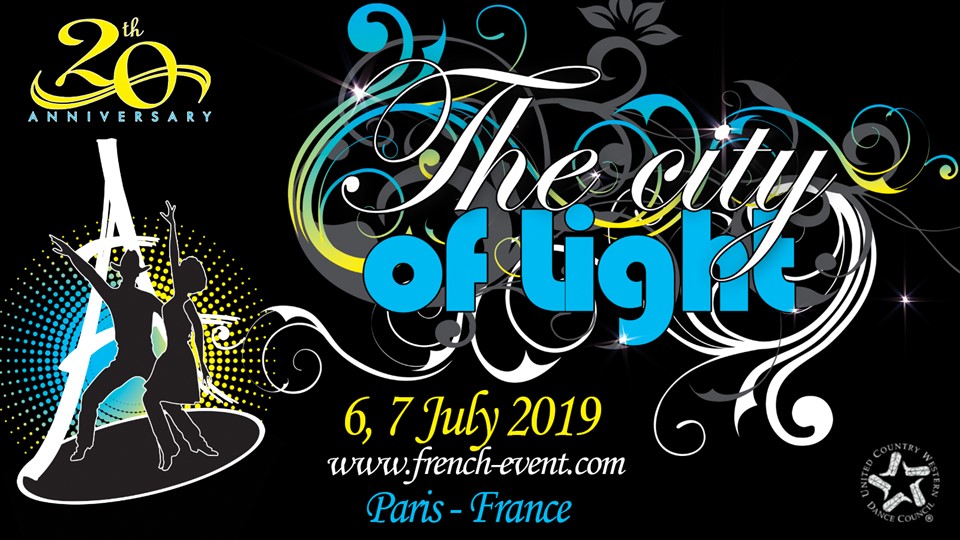 The City of Light – Thank you for your support for two decades!

Started in July 1999, the City of Light – the French Country Western Dance Championship –
and its organization team has been happy and honored to welcome all of you for twenty
years.
The idea of an international competition for Country Western dance in the heart of the
French capital was the idea of Robert Wanstreet, an American, an English teacher and a
country dance teacher. He fell in love with France and started to spread the joy of country
dance across France and Europe in 1993.
Robert, surrounded with a small team of his students and friends, successfully gathered all
the French Country dance clubs in July 1999 for the City of Light event. It was the first
international competition under the UCWDC® organization in France. For four years,
Robert led the City of Light event as its Event Director. Brigitte took over the Event
Directorship and in September 2016 Audrey and Bruno joined her as event directors.
Over twenty years, we welcomed, supported and entertained thousands of new friends
from all parts of the world. We also unfortunately lost close friends who were essential to
the success of the event: Robert in 2011, Paulo Legrand, Maureen Jessop and a
few others.
“The City,” as most of us called it, was synonymous with summer and kicking off the
summer holiday season! It was known for hot temperatures – and no air-conditioning! It
was an international gathering with a large representation from the North American dance
community on the staff and in the competitions. Finally, it was known for its celebrated
Saturday night show with spotlights that were a challenge for even our top performers.
We also were the first in Europe to add an official WSDC swing competition to our schedule
and include swing performances in our shows. We worked hard to be innovative over the
years and make improvements that people would enjoy. One innovation became one of our
signatures: the handmade trophies prepared by Sophie, Brigitte’s sister. Our efforts were
rewarded when we were recognized not once, not twice, but three times with the Star
Award as the best UCWDC European Event.
We, the event directors have decided to put the event on hiatus for personal reasons and –
most importantly to leave space – for a new generation of events and event directors in
Europe. The three of us share millions of amazing memories together and with all our
dance community in France, in Europe and across the globe. We want to thank all of
you, our unbelievable volunteers, competitors, judges, dancers, teachers, dance fans,
family and friends for your support, for all the energy that you shared with us, and for giving
this event such longevity and success. We offer a special note of gratitude for those of you
who never missed any of them.
The event is suspended, but we are still active in the dance community, especially within
the UCWDC circuit. We will continue to support the events in Europe and across the world.
And we will be happy to share good memories and create new ones with all of you in the
future.
See you all on the dance floor,
Warm Regards,
Brigitte, Audrey and Bruno